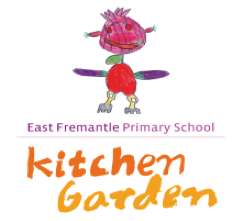 Our involvement in this program originated from a strong desire held by the parent body for students at our school to participate in a program that promotes learning about growing, harvesting, preparing and sharing fresh seasonal food.  A very creative, dedicated group of parents, led by Sarah White, put forward an extensive submission to join the project.  In 2010 East Fremantle Primary School was invited to join the SAKG Program and was awarded a monetary grant to establish and run the program.

Initial progress on the plan took time, as we waited for the new school buildings to be constructed.  At the end of 2011 we were able to trial our first Kitchen lessons and in 2012 we began to establish our main garden and the kitchen program was implemented across the whole school.

Since then, we have developed a fantastic kitchen classroom where all students, years 1-6 get involved in a cooking program that focuses on utilising produce harvested from our established school gardens. This develops student understanding of organic gardening, the practicalities of food preparation and the art of healthy seasonal cooking. Each class concludes with a shared long-table lunch outdoors which celebrates the values of participation, inclusivity and community 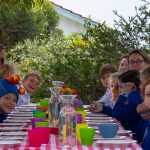 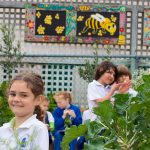 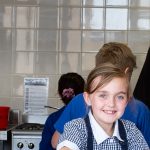